NISMA ARSIS is working with Child Protection Units in Albania in order to provide professional and technical support to child protection units with professional expertise, coaching and direct support to the cases of children victims or suspected victims of crime.  In the Municipalities of Lushnje and Cerrik worked with the representatives of the Municipalities to develop Action Plan for Child Protection which were approved by respective city councils.  In 2019 NISMA ARSIS has developed a monitoring tool for case management in order to improve the impact and ensure the best interest of the child. Currently in the frame of the context of emergencies from the earthquake of 26th of November NISMA ARSIS is working with the system of child protection in Tirana, Shijak, Durres, Vore and Kavaja to directly support all the children identified at risk or in need for protection. 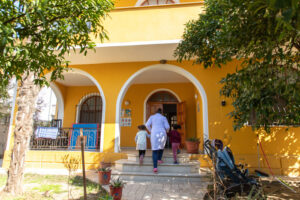 NISMA ARSIS has established the first model of providing Multidisciplinary Services to protect children from abuse, neglect, violence and exploitation in the Municipality of Tirana in the center “House of Colors” in the Administrative Unit no.7 in 2010 with the support of UNICEF and Municipality of Tirana. The model established as multi-functional center developed its services in accordance to the needs of children at risk covering the gaps of the system. This model and its methodology are approved by the Ministry of Health and Social Protection and replicated in Municipality of Tirana, Municipality of Shkodra and Municipality of Durres. The center “House of Colors” provides support to children, youth and their families on daily bases, with a multidisciplinary team composed by social workers, psychologists, child careers, nurse, teachers, social animators, case managers, that work closely with child protection workers providing, food, hygiene, psychological counseling, psycho-social games, non-formal education, administrative and legal support, community development, family strengthening, counselling for employment, case management. 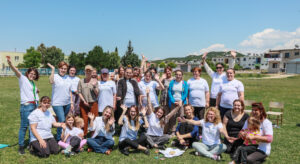 NISMA ARSIS mobile teams have been working in streets (within and after working hours) since 2006 identifying, referring and providing immediate assistance to children victims of trafficking and children in street situation. The street work services piloted model was endorsed Albanian authorities in 2014 and ever since the mobile units of NISMA ARSIS are part of the National Action Plan for the identification and referral of children in street situation. The mobile teams provide their services in collaboration with the Municipality and Police Directorate of Tirana.  We do provide safe transportation 24/7 for all the children identified in the street situation, in police station, in the family at high risk, and/or need to be transferred in the emergency shelter, in residential care institution, or at their family as well as for children that protection measures have been applied, have been deported from other countries and unaccompanied minors.  The safe transportation services do cover cases from all over the country and always accompanied by social worker and psychologist on board. 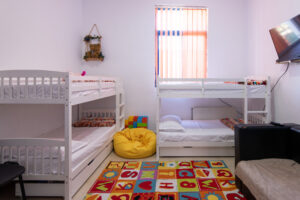 In the premises of the Center “House of Colors” was established a child friendly shelter for children at high risk or immediate risk for 72 hours in 2011 with the support of the Municipality of Tirana and UNICEF. The Service of Safe Emergency Shelter provides support to children up to 18 and to mothers with their children victims of abuse, neglect, domestic violence, trafficking, exploitation, without parental care, abandoned, unaccompanied, etc. The center has provided support to more than 98 children at high risk including their parents per year (approximately 1000 children in 10 years). The Service Safe Emergency Shelter is the first and the only national service which provide immediate support and protection to every child at high risk 24/7 days per week in Albania. In the emergency service are involved 30 professionals. The service has evolved since 2011 strengthening its role and services like providing not only accommodation, direct services, but in the same time supporting the system to resolve through case management, referral and reintegration of every case. This model of service has been replicated by Ministry of health and Social Protection in Public RCI’s and served as model for the first draft of Standards for Safe Emergency Shelters for children at high risk in Albania.

NISMA ARSIS is providing psycho-social services for children and youth in contact/conflict with the law in police stations of Tirana, Lezha and Kurbin 24/7. The aim is to ensure children/youth rights and fair treatment of law enforcement agencies during the interview of children in contact/conflict with the law in Police Station. The model has been piloted since 2011 with the support of Save the Children. This service is provided in police station by mobile team which consist on one social worker and one psychologist (14 professionals are engaged in the team of psychosocial support). NISMA ARSIS has signed a MoU with the Albanian General State Police Directory to provide this service and model it all over Albania. The model of intervention aims also to strengthen the links between juvenile justice system and the child protection system.  All the cases supported in the police stations are referred and followed up with respective child protection workers. In 2018 NISMA ARSIS established two Child Friendly Interview Units in Kamza and Police Station no.6 in Tirana and in 2019 two other ones in Lezha and Kurbin. The professionals of NISMA ARSIS have developed the guidelines for child interview in Police Stations and have trained the dedicated the police officers for juveniles. 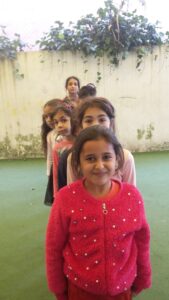 ARSIS and later on Nisma have worked in fight against child trafficking of Albanian children since 2001. It has started with TACT project (Transnational Action against Child Trafficking) identifying Albanian children trafficked and exploited in the streets in Greece, immediate support, protection and also connect with Albanian authorities. This intervention served as the basis for the first Albania- Greece transnational mechanism for the fight against human trafficking in 2008 and later on replicated by Albanian authorities with Macedonia, Kosovo and Montenegro.  ARSIS has been member of Albanian National Mechanism on Anti trafficking since 2010, and now NISMA ARSIS has applied for membership after ARSIS phase out.  NISMA ARSIS is involved in supporting the transnational actions for supporting cases of children identified in the streets of Kosovo begging.  In 2018-2019 NISMA ARSIS social workers placed in cross boards in Kukws and Devoll played a key role on the identification and referral of cases of children victims of trafficking in cross borders.  At the present Nisma is providing identification, referral, immediate assistance and reintegration of children victims or suspected victims of trafficking. The Multi-functional Social Daily Center “House of Colors” is implementing the program of reintegration of children identified as victims or potential victims of trafficking in Tirana Municipality. The program involves the implementation of identification, referral, and immediate protection and reintegration services according to the child protection protocol on case management. NISMA ARSIS as a member of URAT Network is raising awareness for fighting trafficking in person in Albania through info sessions, working with the communities and organizing UN GIFT box campaign in Elbasan, Korca and Shkodra.

NISMA ARSIS is working to technically Support the Ministry of Health and Social Protection to support de-institutionalization process in Albania. In the first phase of the overall De-institutionalization process, were addressed full assessment of children placed in public residential child care institutions, development of individual care plan for every child assessed and consultation with the local actors, municipalities and major stakeholders about future of Institutions.In the second phase of the De-I process will be addressed the finalization of the National Action Plan, reunification of children with their families or placed in a family type care, a model for restructured RCI is implemented and costed, a model for professional foster care is developed and costed. 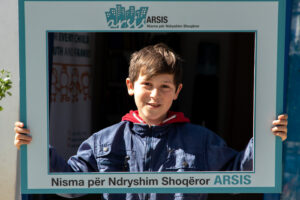